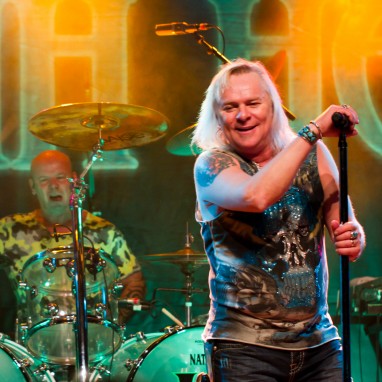 marcus-in-he.. Uriah Heep heeft toch een gedeelte van de tour afgelast:
JANUARY 26 2017
URIAH HEEP REGRETTABLY CANCEL SHOWS IN FEBRUARY
Uriah Heep have been put in the unprecedented situation where they have to forced to cancel their shows in February due to an important medical procedure that vocalist Bernie Shaw needs to get done.
Bernie Shaw explains, "I have had a medical issue for some time that has needed urgent attention. But due to our continuous touring schedule I have not been able to address this. Unfortunately it has come to a head and now I need to get this procedure done urgently to prevent the risk of further complications. This means that we are forced to cancel our European run in February which as any Uriah Heep fan knows is totally against our nature. I can only apologize to all our fans on behalf of myself and the band and we will be back to play for you very, very soon."
The band and management fully support Bernie on this and we cannot wait to have him back on stage with us to continue to play to our fans around the world. We have many exciting shows already booked for 2017 and beyond.
The dates affected are as follows:
February 11, 2017 Leiden, Netherlands Gebr. De Nobel
February 12, 2017 Weert, Netherlands Bosuil